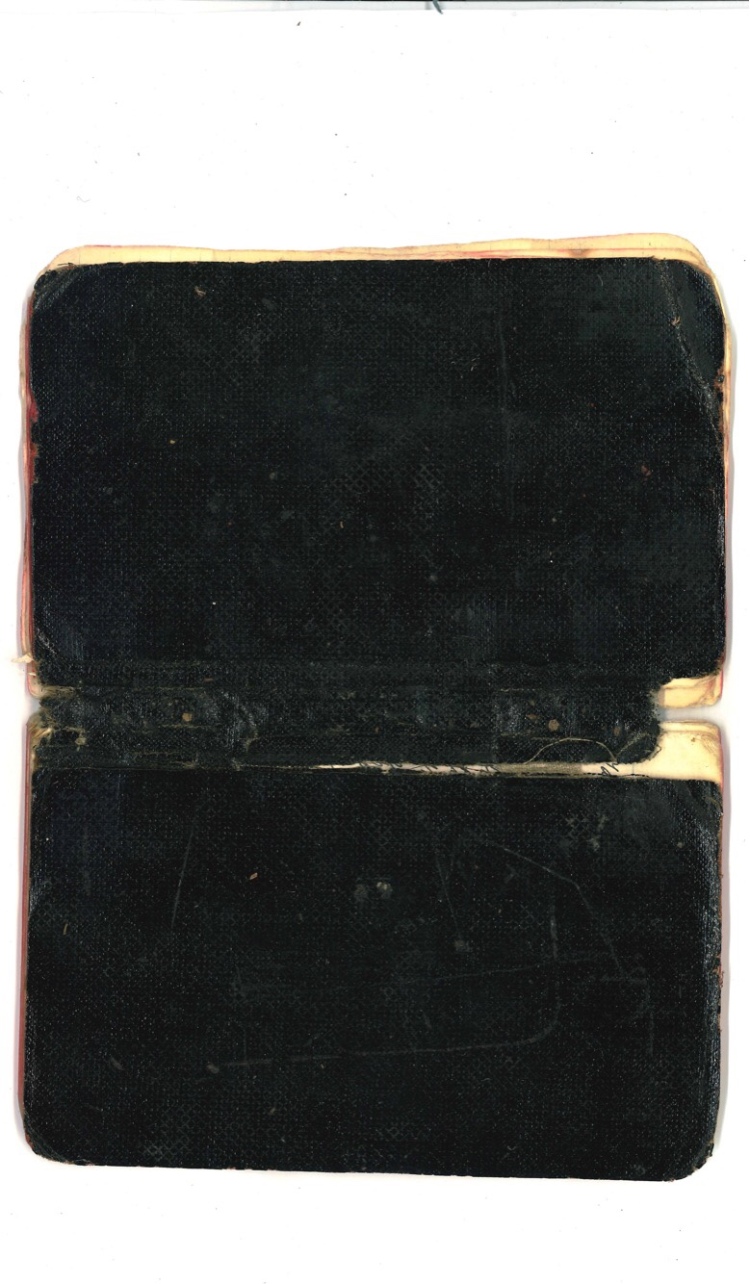 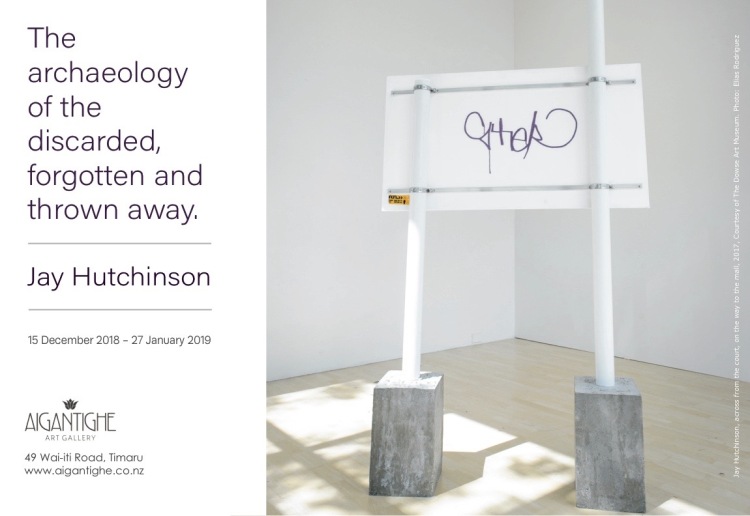 That’s a little #flashbackfriday from me calling my sister? My mother? Anyway, calling somebody after I first moved to Dunedin. They still eat meat pies.

Away from the spaces of silently moving, contemptuous waitresses, with kohl-lined, sad-girl eyes serving ‘takes’ on breakfast burritos and variations on fermented food, a meat pie was like something from another planet.

My amusement was tinged with my own shame. My gag reflex triggered by memories of Stimoril chewy, rounders, and a girl called Holly (another #flashbackfriday) sitting in front of the tuck shop at primary school. She peeled the top off her ‘Four’n Twenty’, squeezed in oodles of tomato sauce and used the pastry as a scoop. “It’s pie soup,” she said. I went to Holly’s house for a sleepover and realised she was poor.

What we think about meat pies can tell us a lot about a person.

Apparently, Americans hate meat pies – they find them “gross” according to The Independent. We antipodeans though … do we have no shame?

Maybe people in Melbourne do eat meat pies. Maybe the contemptuous waitresses on Gertrude Street secretly scarf down a pie from the 7/11 on their break. But know it’s shameful.

Jay Hutchinson’s exhibition at the Blue Oyster art project space in Dunedin features a meat pie. Well a signifier of it. A ‘Jimmy’s’ pie wrapper. There’s even grease marks and gravy stains on it. It’s an index for the meat pie. In two drinks and a Jimmy’s mince and cheese pie wrapper, Hutchinson plucked debris from the waterfront area of Dunedin and put it in the gallery.

Oh, we’ve heard this one before.

It’s called grunge art, or even readymade art, Dunedin. It’s been done to death all over the world.

Does Dunedin have no shame?

Well – actually – maybe you haven’t heard this one before. That’s because Hutchinson does something different than simply placing the everyday in the gallery and asking ‘Well – is it art?’

He has recreated Dunedin’s detritus (a Wendy’s and McDonald’s soft drink cup and the pie wrapper) in digitally printed silk and carefully embroidered over the details. With the marks and stains recreated on the wrappers and the precision of Hutchinson’s stitching, you’re almost tricked into thinking this is just rubbish on a plinth. In fact, inside the plinth, lying beneath the colourful fast food wrappers, is a similarly stitched recreation of the road where the debris was scattered. The gravel and painted yellow lines also have grease marks on them. So, these are peculiar indexes. Maybe they are icons? Just stand-ins; for pies, softies and the tired, puckered, bitumen of Dunedin’s docks.

But then there’s the rusty wire fence. That’s the first thing you see when you walk in. That’s the real thing. Hutchinson cut down a chunk of the fence from the same area. But what your eye is drawn to is the Jimmy’s pie wrapper ‘caught’ in the bottom of fence. It’s how he found it.

It looks as though it’s about to flutter away! said a friend standing next to me. Indeed, it did. Even in the still space of the gallery these icons – likenesses – seemed to work as indexes. I mean this how Peirce meant ‘index’ – as a representation which corresponds to some sort of brutal fact. The unrelenting gale around the silos and warehouses of the docks … well that’s a fact.

But Hutchinson’s work doesn’t just refer to, or index, the grid around Jetty, Jutland and Sturdee Streets in Dunedin. Peirce talks about indexicality as bearing a spatio-temporal connection between the ‘sign-vehicle token’ (say the objects in a gallery, which look like they are gusting away) and the ‘entity’ to which they refer (the wind). I like this word entity. Because it means these ‘tokens’ – wrappers, a rusty wire fence, gravel on the road don’t just refer to a ‘thing’ – it might encompass experience too (though maybe in a thingified form … but that’s another article).

The rusty fence’s connection is clear. It is from the site. But the wrappers … well, thinking about spatio-temporal contingencies, Hutchinson plays with time here. We have the fastness of takeaway food.

Down the gob. With no shame!

I’ve never really had a soft spot for Peirce. One of those American pragmatists. My eyes roll. I like Saussure. But Peirce has some interesting stuff to say about indexes of class in language. You sort of have to tangle up Saussure with Bourdieu and Lacan to get something about class (a good entanglement nonetheless!). Peirce reckoned we index our class by how we use signs. A no brainer. Maybe. But interesting in terms of meat pies.

A meat pie is fast, classed, food. Down by the docks, Jimmy’s pies are gobbled by men in high-vis who slap down $4 at a shop that sells chop-chop under the counter. Someone’s smoko snack. 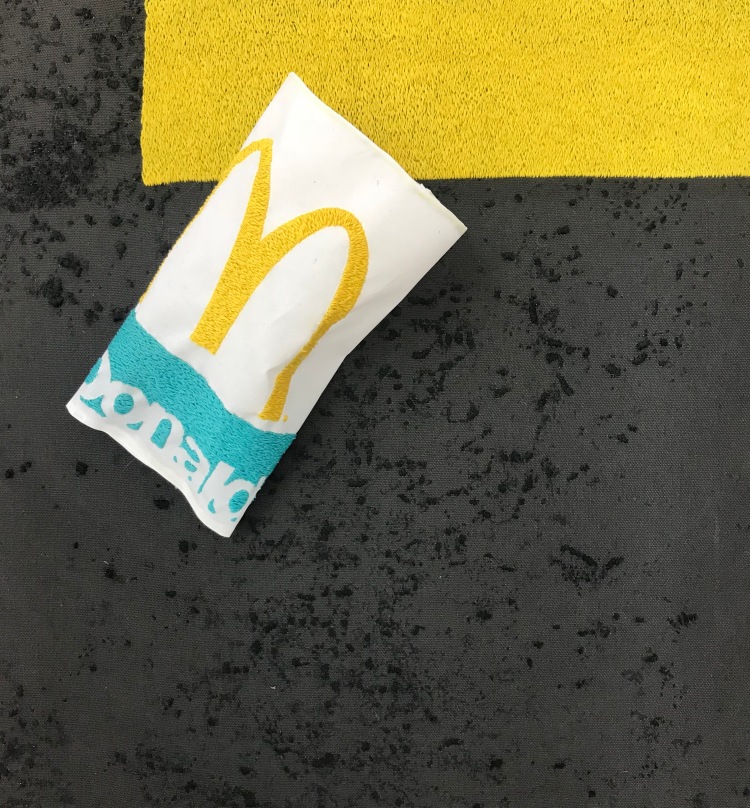 But embroidery is a slow practice. Hutchinson’s labour is indexed through the detail of his needlework. A different kind of labour to the person eating a Jimmy’s pie. Embroidery is also gendered. We can’t forget the frankie set. Don’t worry, you can buy frankie in New Zealand. They know how to craft here. Tiny embroidered monsters are for sale in some of the trendier shops.

Hutchinson doesn’t seem the embroidering type. When I went along to his artist talk, it ended up a workshop. Dressed in skater shorts and a baseball cap, Hutchinson distributed embroidery hoops to the (mostly women) participants and took them on a walk to Jutland Street. They were looking for signs of a fast, working life. But learning a slow skill to replicate them.

He doesn’t seem the embroidering type. But nor does fast food seem to match the type of embroidery the frankie set admire. Sure, they might do that sort of twee ‘clash’ thing where they embroider ‘fuck the patriarchy’ in a cursive font … but …

It’s funny that Peirce first described the relationship between an indexical sign and its signified as that between a murderer and their victim. It’s a brutal reference to reality. Sometimes a pie wrapper can do that to you. It can remind you of some pretty nasty parts of you. It can be brutal out there.

”Post Dunedin Graffiti” revisits five former Dunedin graffiti artists to find out how their careers have evolved in recent years. The paths they have taken have diverged, but the remaining traces of their street styles provide a common thread to the exhibition.

The pseudonymous Shaded Skull’s career has led him to tattoo art, perhaps a natural extension of his strongly graphic drawing style. In contrast, Tom Mackie and Sean Duffell’s work has led to more gallery-based careers. Duffell provides an intriguing installation piece and a Black-on-black painting which harks back to his most notable graffiti creation. Mackie’s work mixes pre-Columbian artefacts with modern pop culture to comment on the immutable nature of art.

Nigel Roberts also looks to art history, with a strong work harking back to a golden age of sign-writing before the advent of modern digital technology. Jay Hutchinson completes the exhibition with an obsessively embroidered replica of a tagged road sign which raises the ”low art” of graffiti tagging to a higher level.

The exhibition’s title is deliberately ambiguous. These are the post-Dunedin works of former graffiti artists, but the lack of a hyphen suggests that it is also more than a slight hint of an instruction to street art’s next generation. 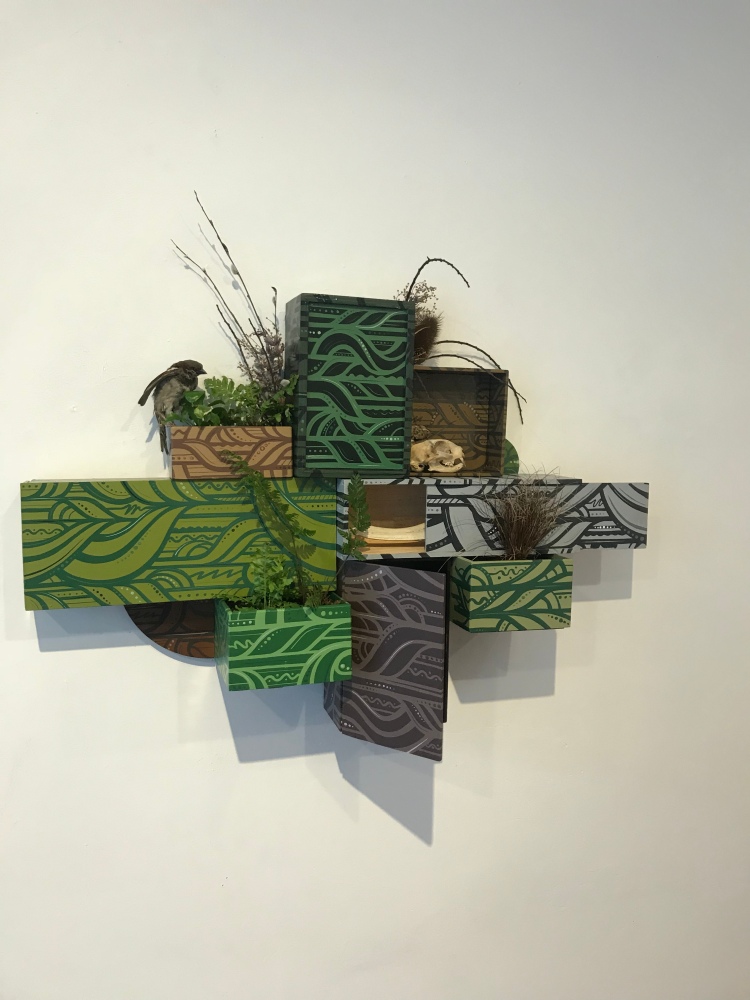 Cabinet of curiosity based on connectivity

Across from the court on the way to the mall 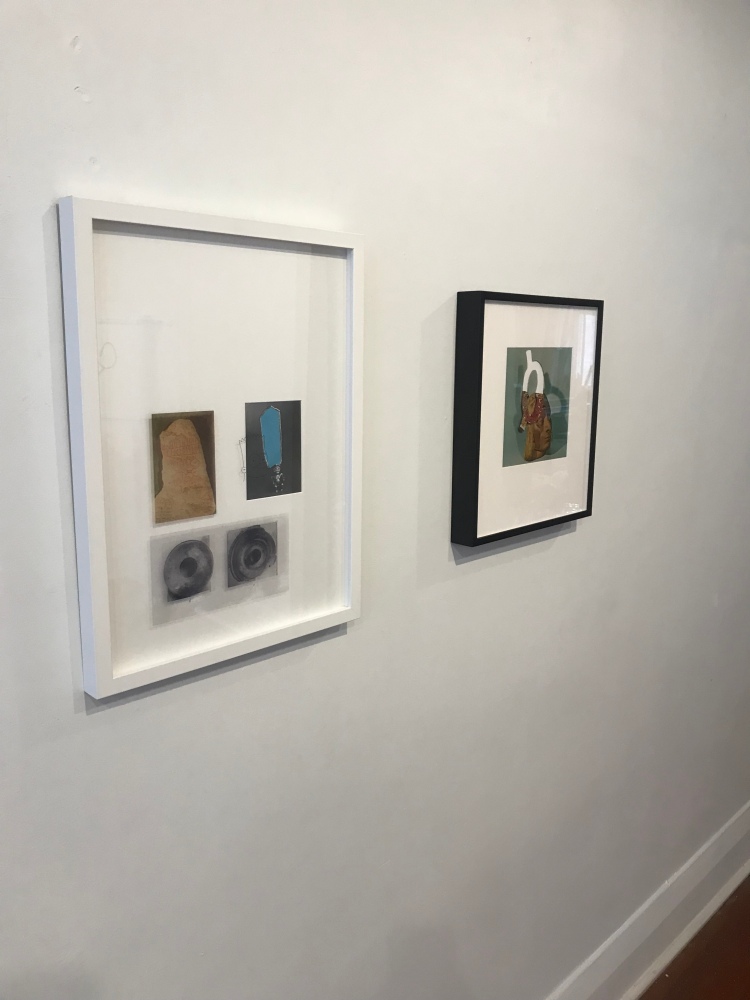 An exhibition curated by agallerypresents.com for Eskdale Gallery. The exhibition includes work by five artists that were part of Dunedin’s graffiti scene between 2000 and 2010. This exhibition however does not focus on graffiti but instead explores the diverse direction that each artists practice has taken. What started on the streets of Dunedin through paste ups, tagging, stencils and throwies, has evolved into what you see today. Each individual has used their talent, passion and dedication to push their practice beyond the street.

The exhibition includes work by

Nigel Roberts, currently based in Auckland. Roberts is one of the earliest graffiti writers in Dunedin. Roberts started painting in the late 1990’s and is best known for his highly skilled large-scale graffiti pieces. His current practice explores typography through a series of complex processes that were used by sign writers before the digital age. Currently his work specialises in the use of gold leaf and reverse painted enamel on glass.

Sean Duffell, currently travels extensively and is based in Wellington. Duffell started painting his now iconic three eyed character in the late 1990’s, a character that still occasionally makes an appearance in his current works. He has made a name for himself as one of New Zealand’s top street artists, specialising in his unique abstract wall pieces that can be found all over the world. Several examples of his work can be found on buildings in and around Dunedin.

Tom Mackie, currently based in Wellington. Mackie’s paste ups first started appearing in Dunedin streets back in early 2005. His practice then evolved on to the walls of Wellington where he created large street pieces, from here his focus then naturally progressed to the gallery. Mackie is a project based artist, he uses museological methods of display as he drags our accepted notions of archive and history into a more unsettling territory.

Jay Hutchinson, currently based in Dunedin. Hutchinson started spray painting stencils on walls in 2002. Hutchinson is a project based artist, his practice explores concepts and ideas around labour, value and exchange. His current work explores the urban environment though hand-embroidered sections of the street, that he spends hundreds of hours slowly reproducing in thread.

Shaded Skull, currently based in Auckland. Shaded Skull started painting graffiti in 2003 and quickly became one of Dunedin’s most notorious bombers. From 2011 he started tattooing, specialising in his own versions of traditional flash that he spends hundreds of hours re-drawing and tattooing at Merv O’Connors Auckland Tattoo Studio, the longest running tattoo studio in New Zealand.

The exhibition opens at 5:00pm Friday the 24th of August and runs until the 10th of September 2018

Nigel Roberts, Sean Duffell, Shaded Skull and Jay Hutchinson will be in attendance.

Looking to his immediate environment while following a psychogeographical model, Jay Hutchinson’s new exhibition, two cups and a Jimmy’s mince and cheese pie wrapper explores the familiar streets of Ōtepoti Dunedin, and in particular, the central industrial area of the Ōtakou Habour.

Through his long-standing interest in urban culture and his chosen medium of needle-work, as is seen in his 2006 exhibition, from textile to concrete at Blue Oyster Art Project Space, Hutchinson employs his immediate geography as a way of understanding it’s contexts and histories and the effect of such understandings on the individual.

Jay Hutchinson is a Ōtepoti Dunedin-based artist with a Masters of Fine Arts from the Dunedin School of Art (2008). He has exhibited through Aotearoa New Zealand, Australia and China. Recent exhibitions include; Loosely based on a series of events that never actually happened including a conversation and an argument with my sister circa 1988, Eskdale Gallery (2018); Across from the court, on the way to the mall, The Dowse Art Museum (2017); Turn left at the end of the drive, Enjoy Public Art Gallery (2016). 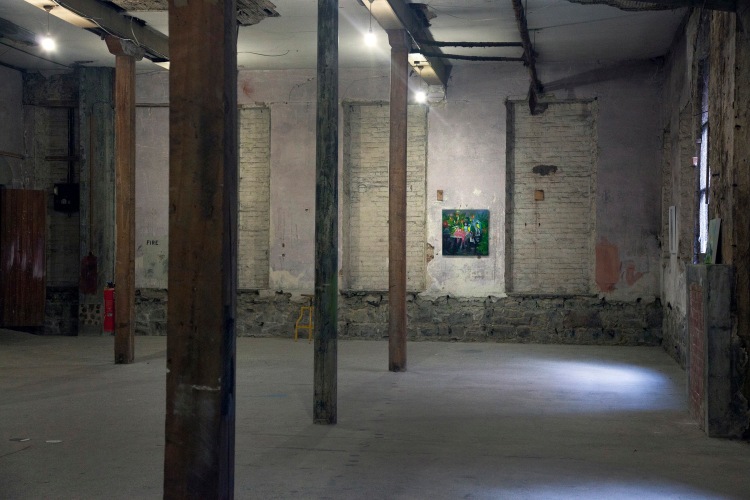 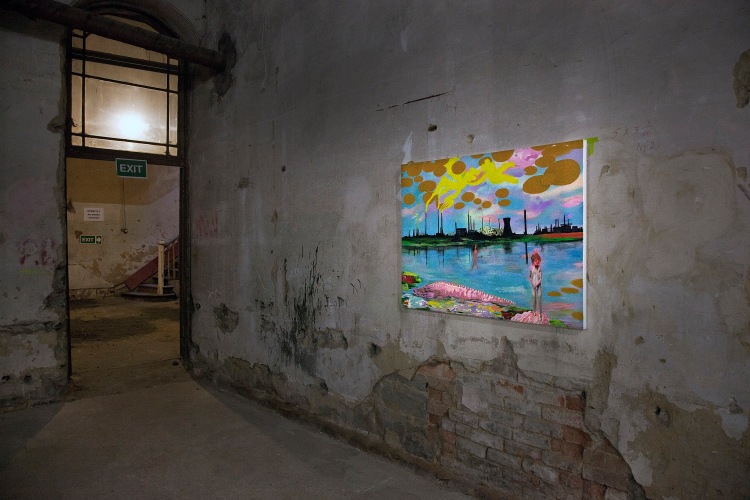 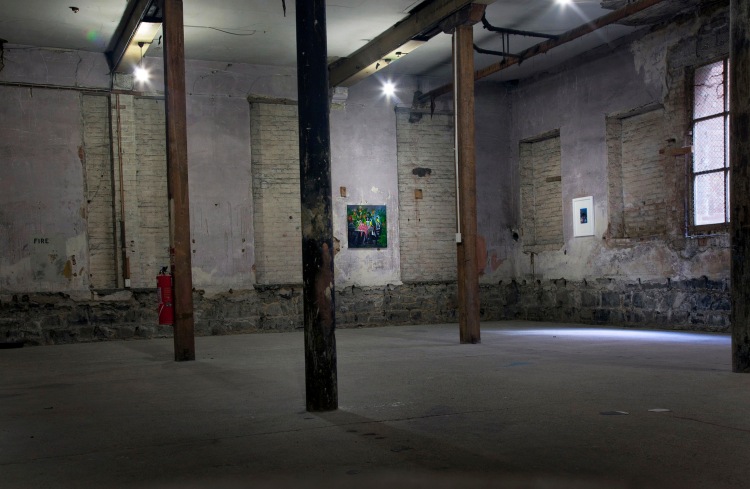 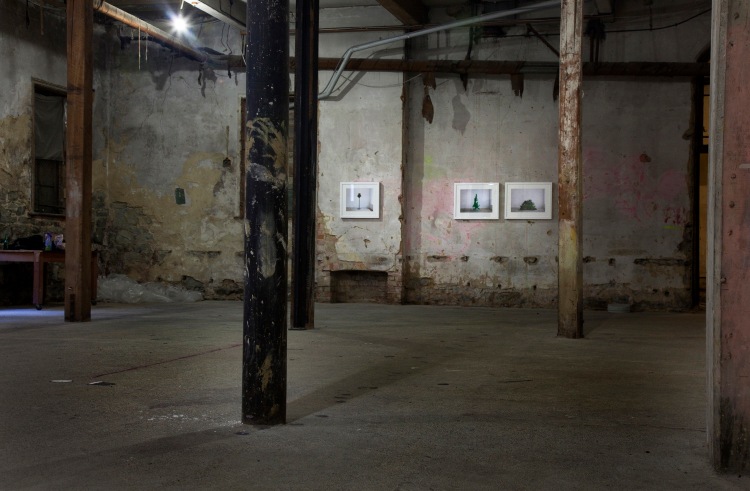